A couple of years ago we had a pretty serious grass fire at Claremont. The cause of the fire was unsual and could have been catastrophic if, there was no one at home. However, Kim was  at home and on the telephone when heard a bang, the power went out and then saw some smoke. He raced out of the house to locate the smoke and found a fire near the power pole.  It was a windy and hot Summer day which meant that the fire started to spread fast. Kim ran to grab the  hose only to realise in the country area with not town water,  no power means no water. He called the Rural Fire Brigade luckily someone was close by and would be on site in a few minutes. Kim raced to the shed to get the water cart which had to be hooked up to the tractor. By the time all these preparations had taken place the fire had spread and was close to the house. 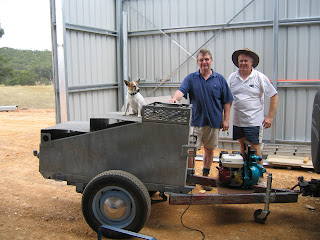 Things got pretty hairy until the fire trucks arrived. Local Yass councilman and almost neighbour arrived with a half filled fire fighting back pack. The water cart was emptied very quickly. Kim and Cecil Burgess worked up a real sweat beating the flames by hand. When the big guns arrived the fire was controlled quickly.

The fire was started by a Magpie shorting out the electricity transformer on the power pole and falling to the ground on fire. This drama really made us think about how under prepared we were for a fire. We did not have any fire fighting back packs near the house and the water cart was only half full. We learnt a few hard lessons that day.

This Magpie caused the fire 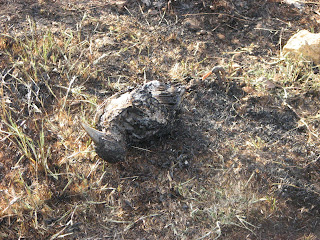 The fire got very close to the house and torched most of the wind break trees. 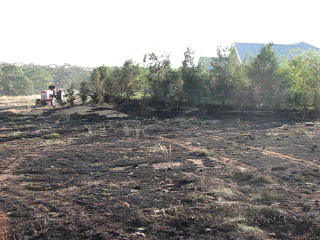 Almost ready to take off over the hill 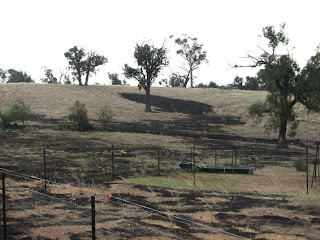 The small bit of dry feed gone in minutes 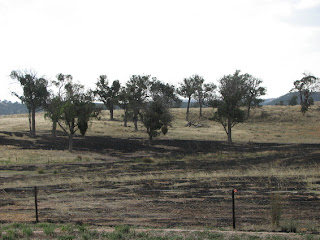