OJD is a wasting disease caused by the sheep strain of the bacterium Mycobacterium paratuberculosis.
OJD is a chronic infection of the bowel. This causes the lining of the bowel to thicken and reduces the absorption of food. Affected sheep show severe wasting. Chronic scouring may occur. Sheep will eat and drink normally until they are too weak to graze. Death is inevitable.
The average time from onset of illness to death is six weeks to three months.
The classic sign of the disease in a sheep flock is a distinct tail to the mob, comprising sheep in uncharacteristically poor condition.
Most sheep do not show signs of illness for a long time after infection. Many sheep infected with the bacteria may carry the bacteria in the gut and spread the disease without showing any obvious signs.
Merinos are more susceptible than crossbreds and British breed sheep. Goats, deer and other species can be infected to varying degrees. There is no cure for sheep with OJD.
OJD was found in Merino flocks in the Southern Tablelands in 1980 and it has proven to be a costly disease for primary producers. Entire floocks were infected and desimated by the disease. The disease spreads slowly and is difficult to detect early.

What is the treatment for OJD?

What we are doing to manage our flock!


1.       All the sheep in our flock are vaccinated.
2.       We joined Sheep MAP. Market Assurance Program.
Joining Sheep MAP is costly and labour intensive but, we thought necessary to ensure our flock is disease free.  Thus we are able to give our clients official documentation about the status of the flock.
When you join Sheep MAP you do so with an approved veterinarian and both of you must keep meticulous records. All the sheep in the flock are inspected and tested by the vet in the first year. If the tests come back negative for the sheep you breathe a sigh of relief and become a monitored negative vaccinated flock, MN1V status. This status gives the animal in your flock 5 ABC points. When sheep are sold from our property we provide the client with a National Sheep Health Statement
http://www.farmbiosecurity.com.au/files/2011/05/National-Sheep-Health-Statement-printable-PDF.pdf
The program awards points for joining the program, testing and inspections these are displayed on the statement.
The vet will inspect your records in the second year. We must keep records of all sheep movements, fence inspections, vaccinations and have animal health statements for all animals introduced in that year.  Our sheep have been tested twice so we carry MN2V status.
This year the vet will inspect our records and the flock.  The vet will look for any thin sheep and if, the vet finds skinny sheep three of them will euthanized and autopsied. We have already inspected our flock and there are no sheep to be concerned about.   This is an example of our flock all in excellent condition. 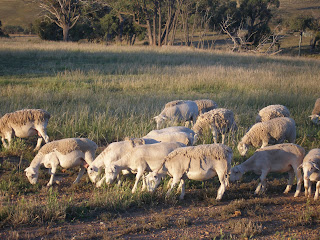 Below is a map of where the disease has spread. We live in the Southern Tablelands so we are in a high prevalence area for OJD. The disease is monitored though abattoirs and this has shown an increased prevalence in Australia. There is a vaccination for OJD.  Gudair was developed by Pfizer and has proved to be very effective. The vaccination is expensive especially if you have large flocks at around $3 per shot.
More information is located here
http://www.dpi.nsw.gov.au/agriculture/livestock/health/specific/sheep/ojd 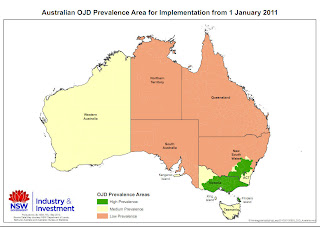