Foxes are a big problem in our area and we often encourage licence shooters to see if the numbers can be reduced.
On Saturday whilst enjoying a quiet afternoon Cameron, Jeff and Kim spotted two large foxes strolling through the paddock. Cameron was the lookout keeping an eye on the foxes while Kim and Jeff headed to the gun cupboard for the riffles. By the time the guns were loaded the foxes had disappeared.

The boys decided backup was required and called Cameron's brother in-law David. He has hunted a few times at Claremont and been successful on a previous occasion.

Dave arrived about an hour later. The plan was for Kim and Jeff to dive to the dam while Dave and Cameron were ready in the bush above the dam to ambush the fox. The plan worked and there is one less fox to attack lambs. Dave is a good shot and killed the animal quickly and humanely. 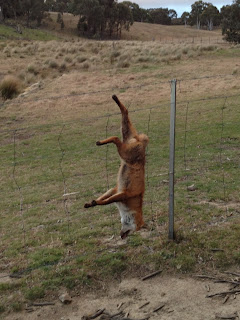