The weather has been pretty dry around here with much less winter and spring rain than normal. My garden is looking pretty parched and I am getting worried. We have been through many years of heart breaking drought from 2002 to 2009  when the land received much lower than average rainfall.
However, even in the driest years the dams that water the stock did not dry up. Some of our paddocks are watered by troughs that fed from a bore. We are lucky that water for stock and humans has never been an issue. Many property owners in our area had to buy water in the drought years.
The big dry came to an end on 2010 when the area received twice the normal rainfall.
After receiving so much rain last year someone turned off the tap during the Autum. There was no rain to grow any feed for the winter. Winter came and while the weather was much cooler there was very little rain. Thoughts of another drought year were ever present in our minds. During September we received some good rain at the begining of the month only to be followed by strong winds and no follow up rain. October only recived half the normal rainfall and what feed had grown during the month was drying out fast. At last, in the last week of October our property received 30 ml or about an inch of much needed rain.  Followed up another 60 ml or 2.5 inches in the first week of November with more rain is forecast for this week. 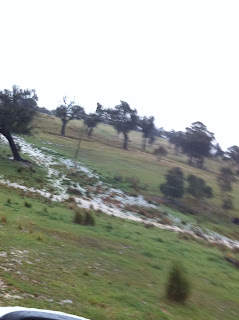 Rain water pouring towards the dam 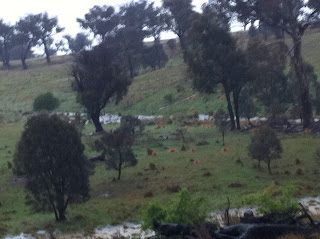 These pictures were taken in the middle of the drought. 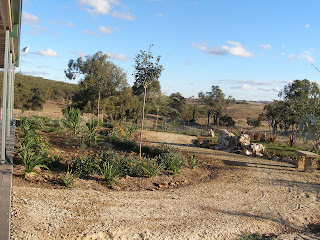 Hubby Kim and good friend Jeff  placing rocks in the garden during the dought years. Look at the background not a blade of grass in sight. 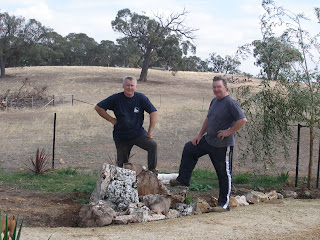 Kim planting trees in the garden. Just look how dry the place looks. 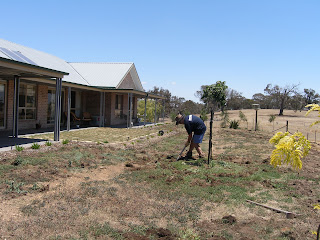 At least we had enough water to establish the garden. 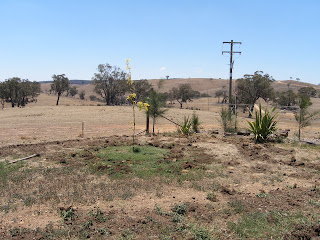