We use a lot of electricity at Claremont. The average large household would use about 20 kilowatts per day. The farm uses between 45 and 50 kilowatts per day. I could never understand why because there is solar hot water, no electric heating and gas cooking, what could be using all that power. Until I realised every time a tap is turned on or a toilet is flushed several pumps are being used and these pumps are powered by electricity.
Kim started doing some research on alternate ways to generate electricity. Initially he thought wind power as Claremont is located in a windy area. We bought an anemometer had monitored the wind strength for six months and to our surprise the wind was not strong enough or consistent enough to meet our needs.
Next choice solar power! The government was offering some great incentives for people to put solar panels on house roofs and feed the power back to the grid. We would get 60.8 cents for every kilowatt generated which meant that 40 cents of every kilowatt could be used to pay for the system. This contract would last for seven years.
The cost of the system that would generate enough power either wind or solar was enormous at around $60,000.00 for wind and $50,000.00 for solar.
We decided to go for the solar system and had 60 solar panels installed on the shed roof in July of 2010. In the 12 months that the system has been installed the average kilowatts per day has been 48. The system will pay for itself in a few years and then the power bills should be nil or very small. 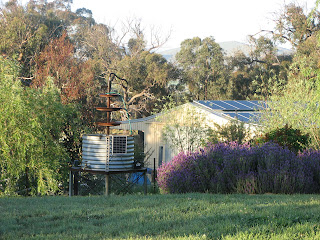 You can see some of the panels on the shed roof.
Posted by Lia at 14:08